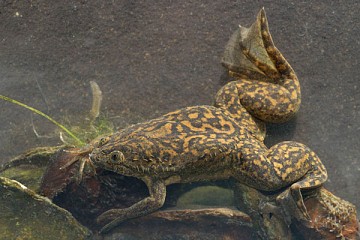 The African clawed frog (Xenopus laevis) is immune to the chytrid fungus (Batrachochytrium dendrobatidis), as this fungus is native to the habitat of the frog in Africa. This frog was distributed around the globe by humanity as they were used for pregnancy tests. It is very likely that together with the frogs the fungus was distributed as well, causing the extinction of many amphibian species so far. Although presence of the funfus is already proven in Hungary, but so far we have no knowledge of causing mass mortality in our country, as well as no resident African clawed frog population. (photo: Jan van der Voort)

Under this category we expect to receive observation data of such species that are non-native or their identification is unsure.

In such cases the attachement of a verification picture is very important!

American bullfrog (Lithobates catesbeianus, previously Rana catesbeiana) It originates from North America. It has several population in Southern and Central Europe and causes serious damages, extruding indigenous species. It has not been reported from Hungary until now. (photo: Wikimedia)DDD

Oriental fire-bellied toad (Bombina orientalis) It is native in temperate regions of the Far East. It has been a popular pet, and released individuals may have the chance to survive in the wild. Therefore it should be considered a potentially invasive species in Hungary. (photo: Twan Leenders)

Iberian ribbed newt (Pleurodeles waltl) it occurs in the Iberien Peninsula, but it has been imported to Hungary vie pet trade. It has not been detected in nature until now. (photo: Jessica J.Miller).