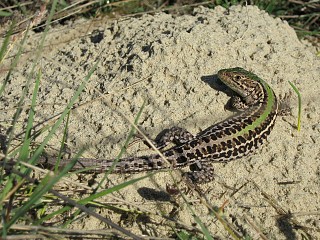 Small (up to 8 cm body length) and slender lizard with highly elaborate dorsal pattern. Along the middle of the back streches a bright green band bordered with irregular rows of small brown blotches.

The BALKAN WALL LIZARD has a flat body with flat elongate head. Total (body+tail) length up to 20 cm. Males have a green band along the back which is brighter in the breeding season.  Sides of the back and upper flanks green or olive with dark brown and creamy white spots, and a creamy white line along the mid-flanks. Belly usually off-white, orange in breeding season. Females similar to males, but less strongly marked and paler in colour. Young similar to adults, but often lacking the mid-dorsal green band.

Belly of males turns orange in the breeding season.

Balkan wall lizard in a burrow

Although it tolerates hight temperature, at mid-summer it retreats into burrows during the hottest hours of the day.

Balkan wall lizard in a burrow

Although it tolerates hight temperature, at mid-summer it retreats into burrows during the hottest hours of the day.

The pattern and coloration in females is duller, less elaborate than in the males, but similar in its main outline.

The coloration of young is similar to that of the adults, but they miss the mid-dorsal green band.

During the breeding season the belly of males is orange. On ghis specimen the femoral pores characteristic of males are conspicuous.