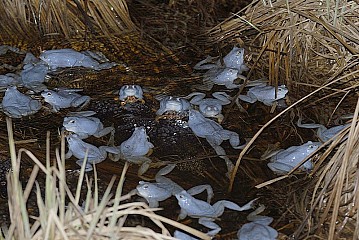 Male moor frogs form massive choirs; the females lay down their egg clutches aggregated. Clutshes attach to each other

Body length of the MOOR FROG is 6.5–8 cm. Its back is brownish, often with a light central longitudinal stripe with darker margins. Its sides can also have some lighter colouration with sharp edges. Along the border of the belly and the sides the species often have a characteristic row of black patches, which begins in front of the base of the forelimbs. The hind limbs have darker transversal stripes. Its belly has light colouration. In the breeding season the head, the back and sometimes the whole dorsal surface of the males become bright turquoise.

In the breeding season males getting bright blue.

Forearm of males thikens in the breeding season to ensure a firm grasp on the females.

Breeding colouration can be darker or lighter blue.

Colour pattern of the moor frog

There are characteristic black blotches on their sides which are absent from the two other brown frog species.

Before egg-laying the females belly is round of eggs.

The moor frogs lay down their clutches of 1500-2000 eggs to the bottom surface of ponds.

Juvenile specimens have similar pattern to that of the adults.

The tadpoles of moor frog are hard to tell apart from those of the common frog.

Egg mass of cca. 300-400 individual clutches in the Lankóci Forest, along the river Drava.