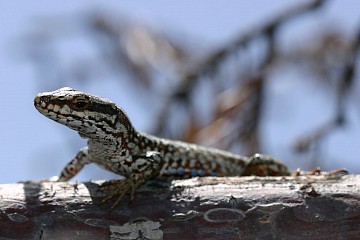 Its coloration is dominated by shades of brown and grey, but some specimens have a greenish hue. Bright blue dots ornament the edge of the belly in breeding males.

The COMMON WALL LIZARD has a flat body with flat elongate head. Total (body+tail) length up to 20 cm.  Markings extremely variable, especially in urban areas where animals from elsewhere in its range may have become established following the release of pets or accidental transport amongst freight. In some regions completely black individuals occur.

Back, sides and legs of males generally greyish-brown with dark and off-white speckles, and an orange belly with black spots. During breeding season males have light blue dots on the lower flank. Females are duller in pattern: ground colour light brown, with a thin black mid-dorsal line that may break up, dark brown flanks and off-white or pinkish belly. Young similar to females, but somewhat greenish.

During the breeding season the throat and belly in males turn orange and the edge of the belly has bright blue dots.

Often found on warm rocks and concrete walls, even in cities with dense human populations.

Common wall lizard on the watch

Always alert, ready to flee. Often observed as watching out for danger.

Do not look for these lizards high up in the vegetation! However, they occur also on forest egde habitats.

Brown, grey and their shades dominate their coloration.

The throat and belly is often orange of males during the breeding season. Note the blue spots on the edge of the belly!

Prefers to bask near cracks of walls and rocks, where quickly retreats in danger.

The pattern and coloration of young is similar to that of the adults.