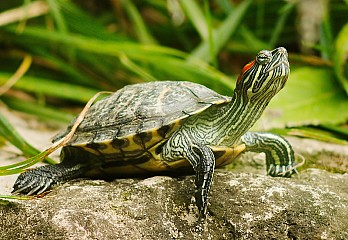 Red-eared slider in an artificial lake at Margit-island.

A North-American and potentially INVASIVE species, which reached Hungary via the pet trade. Specimens in the wild are released by hobbyists. Differs from European pond turtle in its “red ear”, a red blotch behind each eye, and longitudinal yellow or creamy-white stripes on legs and tail. As a potential invasive, trading of RED-EARED SLIDER (Trachemys scripta elegans) has been banned in Hungary, but its usually smaller relative, the YELLOW-BELLIED SLIDER (Trachemys scripta scripta) has replaced it in the pet trade. The ‘ear’ of the latter is yellow.

Basking groups of non-native sliders can be observed often in several natural habitats.

Collected or unwanted sliders are accepted by Budapest Zoo, where they get accommodated most likely in the Big-Lake.

Red-eared slider in an artificial lake at Margit-island.

Red-eared sliders in an artificial lake at Margit-island.

On this picture you can see the visible characteristic difference between the two subspecies.

Adult females, living outdoor in Budapest Zoo lay eggs regularly. These nests are usually destroyed, but annually few hatchlings are always observed. We have no knowledge of regular reproduction in natural habitats of Hungary, although we received a few observations of breeding.